IMG_6036
The Netherlands didn't escape the horrors of World War II. In 1939, the Dutch government erected a camp near the town of Westerbork to house (mostly jewish) refugees from Germany. The nazis later turned Camp Westerbork into a concentration camp. A total of 107,000 people passed through the camp; a mere 5,200 of them survived the war. The tombs in this picture mark the number of people deported to the extermination camps at Sobibór, Bergen-Belsen, Theresienstadt, Mauthausen and Auschwitz-Birkenau.

IMG_6037
Close-up of the Sóbibor tomb. The text on the front reads, "34,295 Jews from the Netherlands were murdered in Sóbibor." The number on the top (34,313) marks the number of Jews deported from Westerbork to Sóbibor.

IMG_6040
Camp Westerbork. Areas of elevated terrain mark the location of the main buildings. This was a large living quarters.

IMG_6041
Camp Westerbork. Areas of elevated terrain mark the location of the main buildings. This was a large living quarters.

IMG_6045
The National Monument at Camp Westerbork marks the starting point of the final journey of some 100,000 people. The rails are attached to 93 ties, signifying the number of trains that departed Westerbork.

IMG_6046
The National Monument at Camp Westerbork. The bent rails express the despair felt by the people deported from Westerbork.

IMG_6047
A wreath at the National Monument at Camp Westerbork remembering Operation Market Garden. The white card reads, "The Market Garden old comrades remember with sadness and gratitude all those men and women who died in the liberation of the Netherlands and northern Europe. We will remember them."

IMG_6048
Another wreath at the National Monument at Camp Westerbork.

IMG_6049
The Monument of the 102,000 Stones at Camp Westerbork commemorates the Jews, gypsies and resistance members who died after being brought to Westerbork.

IMG_6050
The Monument of the 102,000 Stones at Camp Westerbork. The stones are adorned with a star of David, a flame or nothing to signify Jews, gypsies (Sinti and Roma) and resistance members.

IMG_6051
The house of the commandant of Camp Westerbork, Albert Konrad Gemmeker, is one of the few remaining original buildings.

IMG_6053
Our bungalow in Hoogersmilde.

IMG_6064
Interior of the bungalow.

IMG_6071
The weather was good, with temperature above average, little wind and only two rainy days.

IMG_6075b
View from our bungalow on the final afternoon. 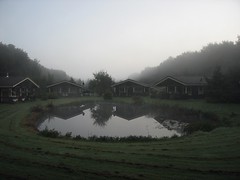 Autumn Chill
Fog surrounds a group of bungalows on a bleak autumn morning.